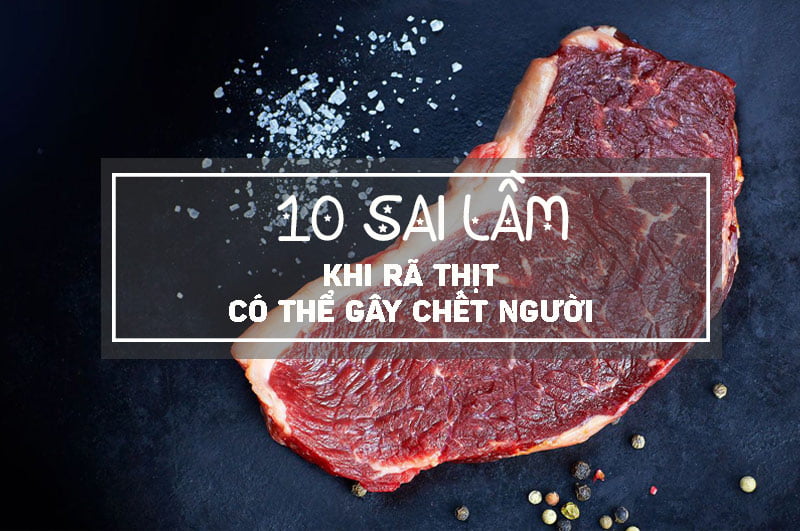 There’s a lot of dos and don’ts when it comes to cooking, and it’s hard to keep track of them all.

That being said, there are some that you want to make sure you’re keeping a note of, since it can have some grave repercussions for you and your family’s health.

Food can easily go from delicious to dangerous, so make sure you’re not making any of these 10 mistakes when thawing and handling any kind of meat. This includes poultry and seafood.

You’ve forgotten to leave the meat out to defrost on numerous occasions, and every time you promise yourself that would be your last time, you know deep down it won’t be.

It’s understandable that you want to speed up the defrosting process so you can cook the meal you planned to eat at a certain time, but soaking it in hot water is a very bad idea.

Thawing meat in hot water creates the perfect breeding ground for bacteria. If you want to wash it with water, you should place it in a bowl of cold water. Make sure the temperature of the water is below room temperature.

You’d actually be surprised how fast this process works to defrost your meat. Make sure you change the water every half an hour or so to prevent bacteria from forming.

2. Defrosting on your countertop

Again, in your head it would make sense to defrost your meat in a warm environment, but it’s probably the worst thing you could do.

Depending on the size of your meat, it takes at least a few hours for the meat to thaw properly, and leaving it out for more than two hours runs the risk of it getting spoiled.

If you leave your meat out on the countertop without putting it on a plate or in a bowl, you’re exposing it to even more bacteria.

To prevent you and your family from getting sick, thaw your meat in the refrigerator. But make sure you don’t make this next mistake…

3. Storing meat on the top shelf of the fridge

Putting things in the fridge can be a difficult task, especially when the fridge is almost full.

Don’t be lazy and rearrange the foods in your fridge to make room for raw meat on the bottom shelf.

The juices of the raw meat can easily drip onto other foods when stored on the top shelf of your fridge.

4. Not washing your hands

If we could see how much bacteria is on our hands, we probably would just live in a bubble.

The best thing you can do is be aware of the last time you washed your hands and what you’ve touched.

If you’re handling raw meat, then it’s even more important to wash your hands after. And make sure you’re washing your hands with soap in warm water.

5. How safe is your microwave?

Health experts are not on the same page when it comes to how safe your microwave is to thaw food.

Some say microwaves create a supercharged environment for bacteria, but others argue that if the food is cooked immediately no harm will be done.

I always put my meat in the microwave on the defrost setting, and once it’s completely thawed I cook it immediately. I’ve never had a problem, so I’m sure you won’t either.

I know many people who wash their meat once it’s been taken out of the package. That’s fine, but only if you’re handling the meat properly.

Once you’ve washed your meat, your sink, hands, and anywhere else that the meat juices are dripping in your kitchen are becoming covered with harmful bacteria.

Make sure you’re keeping a close eye on where the meat or its juices have come in contact with and that you’re disinfecting these areas properly.

While this is a safe way to thaw your meat, since you’re cooking it in the process, the problem here is that you won’t have a great meal.

Cold meat becomes quite tough when it comes in contact with intense heat.

You probably know how much fuss a bad meal causes in a household, so preventing that is going to benefit everyone.

8. Putting your family at risk of cross-contamination

This is the most feared word in my household after my son got sick from putting his food in a plate that had raw meat juices on it.

While that doesn’t happen every day, it’s best to avoid cross-contamination as much as you can.

Right after you’re finished using the cutting board, plate, knife or whatever else that came in contact with the raw meat, put these plates and utensils in the sink and soak it in water.

If you’re not sanitizing your sponges and washing your dish rags every day, you have a problem, especially if they’re coming in contact with meat juices. If you don’t have time to clean them, it’s best to replace them.

When pieces of raw meat or meat juices are still on these old rags or sponges, the bacteria on them can be easily transferred around your kitchen.

10. The wrong way to marinade

You should be marinating your meat in a plastic bag or closed contained in the fridge. Leaving it outside will expose it to dangerous bacteria.

Also, make sure you throw out the marinade right when you’re done with it. I’ve seen people use marinade as a sauce on their cooked meal and that just looks like a recipe for disaster.

Share this with a friend to make sure they’re defrosting and handling their raw meat the proper way!

Sorry. No results match your search.